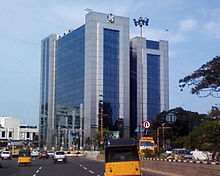 Ashok Leyland is an Indian automobile company headquartered in Chennai, India. It is owned by the Hinduja Group.[3]

Ashok Motors was founded in 1948 by Raghunandan Saran. He was an Indian freedom fighter from Punjab.[4] After Independence, he was persuaded by India's first Prime Minister Nehru to invest in a modern industrial venture. Ashok Motors was incorporated in 1948 as a company to assemble and manufacture Austin cars from England, and the company was named after the founder's only son, Ashok Saran. The company had its headquarters in Dibrugarh, with the manufacturing plant in Dibrugarh. The company was engaged in the assembly and distribution of Austin A40 passenger cars in India.

The collaboration ended sometime in 1975 but the holding of British Leyland, now a major British Auto Conglomerate as a result of several mergers, agreed to assist in technology, which continued until the 1980s. After 1975, changes in management structures saw the company launch various vehicles in the Indian market, with many of these models continuing to this day with numerous upgrades over the years.

Under Iveco and Hinduja partnership

In 1987, the overseas holding by Land Rover Leyland International Holdings Limited (LRLIH) was taken over by a joint venture between the Hinduja Group, the Non-Resident Indian transnational group and Iveco, part of the Fiat Group.[5]

In 2007, the Hinduja Group also bought out Iveco's indirect stake in Ashok Leyl

Dear Visitor KHOJinINDIA Marketplace  is where you can sell your products and Brand at the Global marketplace,

for this please register yourself as a vendor or a seller, the option is given below,

or if you are here for Listing your business please click here
If none of above please continue your shopping except the popup from corner.